Suppose you want to experience a truly exotic wilderness odyssey, but you can’t because you are stuck at home. In that case, you could hardly do better than to watch this adventure video about skiing the “Floating Mountain.” This short film, Black Diamond Presents: The Floating Mountain, has all the ingredients for a great adventure – exotic locales, mysteries, hardships, and the struggles to get through it all.

Globe-trotting professional athlete, Mary McIntyre, had been hearing vague rumors about this mysterious mountain for a few years. It always sounded amazing, with some of the best, most satisfying skiing on the planet, but there were few concrete details she could find about it. No one seemed exactly sure where it was or how to get there. But the mystery seemed to make it an even more desirable goal for her. Based in Salt Lake City, Utah, Mary has already been on some amazing trips. She skied the Himalayas, the Andes, even the third-highest African peak, Mount Stanley, in Uganda. So, this new, mysterious mountain seemed right up her alley if she could ever find it.

Her quest turned out to be the lone, isolated Mount Rishiri, the center of its own island, located just off the northernmost coast of Japan. The massive inactive volcano occupies nearly the entire island, rising over 5,600 feet straight out of the ocean. It was rumored to have incredible 5,000-foot ski runs heading right back down to the shore. And you can even see Russia from the summit!

Mary chose pro athlete, Parkin Costain, to accompany her on this voyage to Japan. Upon arrival, the plan was to simply head north, as far north as possible, where civilization eventually gives way to natural countryside. The two find Japan, in general, to be neat and orderly, almost curated, yet to an American still very exotic. Or, in the words of her companion Parkin, “This place is crazy!” 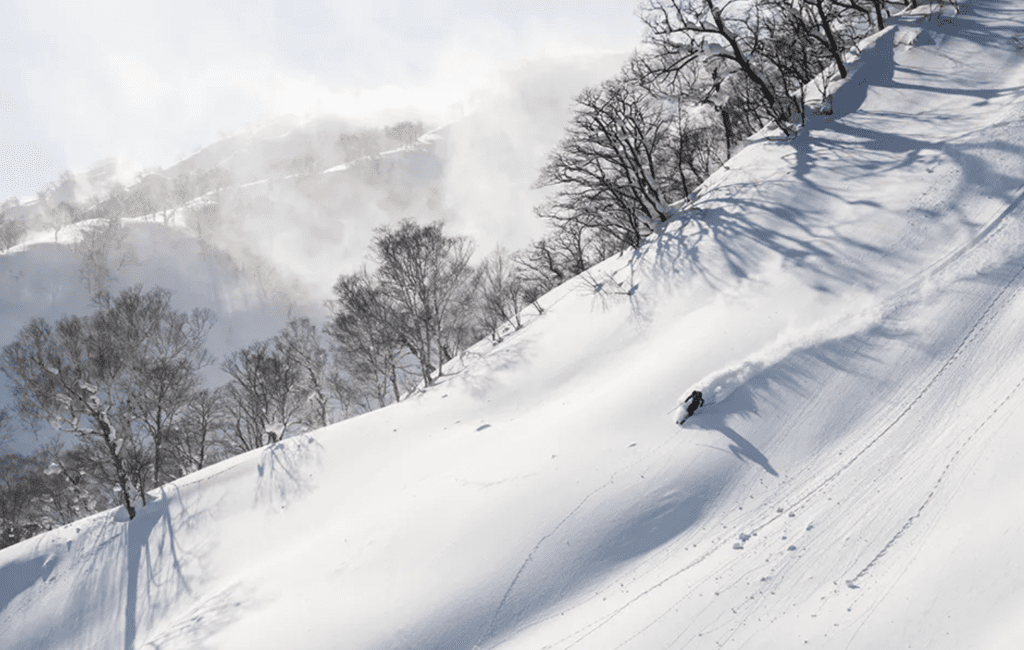 They drive north as far as they can, and finally, they can see it from across the water. Tall, giant, and completely snow-covered, it looms up from the seas like some sort of specter. It honestly looks to be impossibly floating just above the surface of the water. But Rishiri Island is actually inhabited, if sparsely, mostly by traditional Japanese fishing villages located here and there along the coast. Just like the mountain itself, absolutely everything is covered with thick layers of snow.

The trailhead leading up into the mountain begins literally across the street from the ocean. Mount Rishiri has a very distinct look, with cliffs and valleys that appear to be more rugged than usual for a mountain this size. All the features just seem larger than life somehow. The snow and ice are absolutely everywhere, as is a fierce, relentless wind. As the travelers observe it from across the waves, one remarks that it doesn’t even look real.

After a ferry ride across the frigid waters, they finally set foot on Rishiri Island, and of course, the mountain appears to be even larger than ever. They cannot wait to begin, but their first attempt up the slopes nearly ends in a disaster as a steady snowfall suddenly turns into a white-out. They are forced to stop and slowly retrace their tracks to get safely out of the snowstorm. But once free of the blinding snow, they discover that the mountain has opened itself up, revealing an amazing wide 5,000-foot-long natural halfpipe all the way back down to the shore. The video of them skiing this thrilling run is really fun to watch, truly world-class skiing conditions.

They find a mountain guide, who tells them of a small hut about halfway up, which they intend to use as a base for their summit attempt. Of course, the tiny building is completely encased by snow and ice, just like every surface of Mount Rishiri. But at least the hut offers them shelter from the nonstop wind and snow.

Unfortunately, they have to endure quite a wait in the frozen hut, hoping for an eventual break in the weather. It is a frustrating stretch of time, cooped up in this small freezing building, but Mary had been in similar situations before and is philosophical about it all. Your options are pretty much just to wait it out and watch the unrelenting torrent of wind and snow blow past. She talks of the “violence of the wind” and marvels at the sheer volume of show it carries, describing the outside scene as “utterly chaotic.” But there’s no rushing it … a visitor must “sit and wait for the mountains to let you in, and sometimes they don’t.”

With the mountain being stubborn, the two decide to explore around the edges of the island. The video has a nice non-storm interlude, documenting some of the very old traditional Japanese rural fishing occupations held by various villagers. It shows authentic Japanese cuisine being prepared and enjoyed, as well as several different artisans engaged in their labors. As traditional rural life slowly disappears in Japan, it is nice to see there are still some very remote locations where the old ways continue even today. 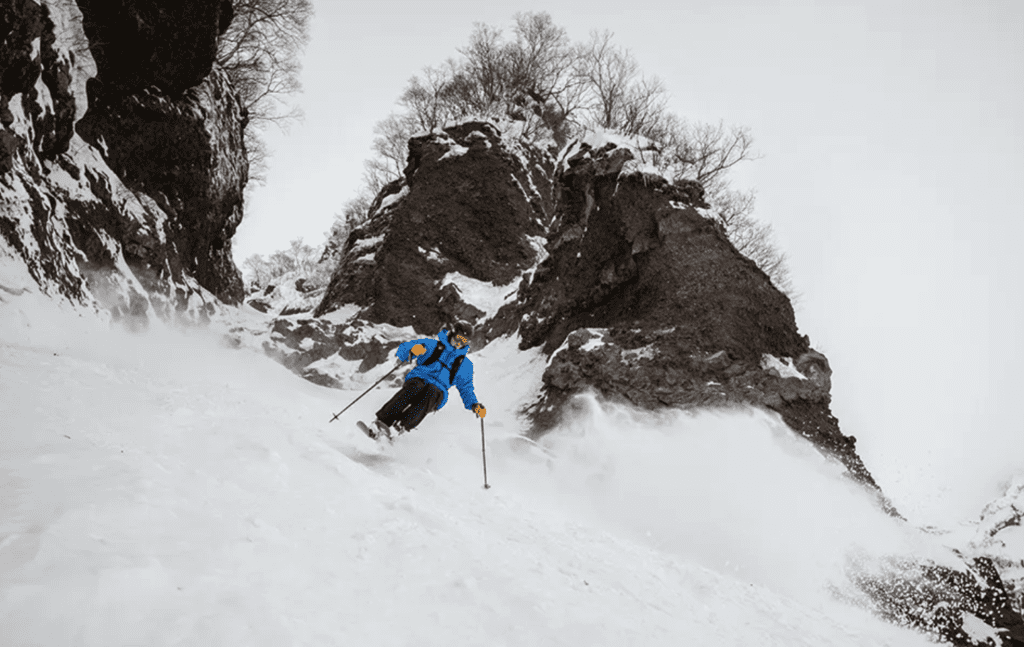 Rumored to have 5,000-foot runs from its alpine summit down to the ocean, yet revered for its fierce wind guarding its flanks, Rishiri had remained an elusive objective until just recently. Photo courtesy of Black Diamond.

But the mountain keeps calling them back, and this time a local person shows them a different route up, revealing endless vistas of ski runs to them. Mount Rishiri has seemingly limitless possibilities for skiing, if you can squeeze a trip in between the icy storms that constantly roll through. The footage of the two adventurers getting their complete fill of breathtaking mountain runs is a joy to see – what an amazing ski mountain!

Back on the ferry, Mary turns a bit wistful about the end of their adventure. For two solid weeks, the vast mountain had been such a constant presence in their lives, and now, they are leaving it behind. The two are surely more comfortable now, at sea level and out of the biting wind and blowing snow, but Mary’s heart seems to be still on the mountain. The last two weeks felt like a dream, and despite the cold, despite the hardships, all she wants to do is to go back to the Floating Mountain.

Black Diamond Equipment’s roots lie in the hand-forged climbing hardware of Yvon Chouinard, who started selling his gear from the trunk of his car in Yosemite Valley in 1957. Chouinard’s visionary equipment revolutionized the climbing world by raising performance standards while also leading the sport to new and sustainable ethics. You can now find Black Diamond at the base of the Wasatch Mountains in Salt Lake City, Utah, where they are immersed in their passion for the outdoors: climbing, skiing and mountain pursuits.

What began with a backyard anvil and a hammer has now grown into a global company with offices on three continents. Black Diamond is a company that’s not just for rock climbers and skiers, but one that stands for the spirit of the sports they live, their values and goals, past, present and future. Since 1957, Black Diamond’s innovative gear designs have set the standard in numerous areas. This is partly the result of dedication, desire and diligence on the part of an incredible team of people. It’s also a product of the fact that each of them are climbers and skiers themselves.

Mary McIntyre grew up roaming through the mountains and deserts of her home state of Utah. She started skiing just before her second birthday and hasn’t stopped since. Combining her love of long days in the mountains and extreme snacking, Mary travels the world using skis as her catalyst for connection. Since getting her first passport at three months old, she’s been in search of people, places, and stories, using her camera to capture images of the Wasatch mountains she calls home along with the Himalaya, Andes, and many lesser-known ranges in between. After completing degrees in Geography, Environmental Sustainability Studies, and French at the University of Utah, Mary now works towards documenting the diversity of human experience through narrative and imagery while skiing in bizarre and beautiful places around the world.

Skiing and snowboarding in the backcountry is about as thrilling and rewarding as it gets. But these experiences are also labor-intensive and, due to risk of avalanche, require that you have the tools and education to make safe, smart decisions. evoTrip has partnered with some of the best mountain schools & guides around to deliver a series of backcountry courses and trips with education, safety, and – of course – fun, top of mind. Whether you’re a beginner looking to get your AIARE 1 Avalanche certification, or an intermediate to advanced backcountry user looking for guided trips with famed traverses and epic big-mountain descents, they’ve got you covered. Experience the excitement of backcountry skiing in the scenic Utah. Learn from the pros how to use gear, safely select routes, and have fun off-piste. Friendly local backcountry guides share knowledge and skills for you to discover the…