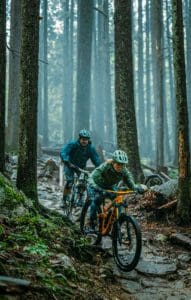 After nearly 30 years on the harrowing and hallowed trails of British Columbia’s North Shore Mountains, Betty Birrell still thinks life is one big playground—and that you’re never too old to send. Betty started mountain biking after her career as a mountaineer and professional windsurfer. Three decades later, Betty Birrell is a role model for her son, her friends and anyone she’s met over the years. She’s living proof that you’re never too old to send.

For more about Betty Birrell’s life as an inspiring mountain biker, click here:

Invest the sweat. Get paid in gravity. Patagonia’s Dirt Roamer Series is a fun-hungry, consciously constructed line of MTB apparel so elite, it’s usually reserved for podiums and Strava records.

Are You Prepared To Be Rescued?

57 Hours In Bellingham, Washington As A Mountain…

Bellingham is a paradise when it comes to outdoor adventure. And though there are many opportunities for exploring the land and sea, the city is predominantly known for being a mountain biking Mecca.

Bring Power To Your Pedals

The Washington BDR route offers intrepid motorcyclists and overlanders a network of backcountry roads and trails through some of the most adventurous terrain in the Lower 48.