Being cooped up during COVID-19 presents many difficult personal challenges. How to socialize, how to exercise, how to work – the list just goes on and on. Many people feel absolutely stir crazy stuck at home for seemingly forever! And how people struggle to find solutions for these problems is a long list as well, with many crazy and even desperate ideas. But on the bright side, even if you are frequently cooped up, it helps to remember that there is always the outside, the great outdoors. Maybe you can’t fly anywhere or go to a restaurant or a party, but you can still venture outside nearly any time you want. As many people realized during COVID-19, the outdoors still holds numerous attractions. Nature, mountains, biking, climbing, skiing, which to choose? One special group of friends managed to combine them all for an amazing adventure, right in the middle of the COVID shutdown.

An adventure first has to have its rules … no restaurants, no gas stations, no hotels. And no cheating! An adventure also needs a goal, a daring quest. So, the three guys decided to spend three weeks attempting to summit and ski seven distinct peaks in the Cascades. As it happens, these volcanoes are spread out in a relatively straight line, approximately one hundred miles apart, stretching from northern California into southern Oregon. So, their path was straightforward, at least on a map.

But the “no fossil fuels” rule was a tough one, with pretty much only one possible answer – bicycles. The plan was to take one day to bike to a peak and spend the next day climbing and skiing it. And then back on the bikes for another hundred miles to the next one. The line of peaks stretches about 600 miles and involves a grand total of 100,000 total vertical feet of climb. It seems pretty well-planned and simple! As someone remarked at the onset, “How bad could it be?” 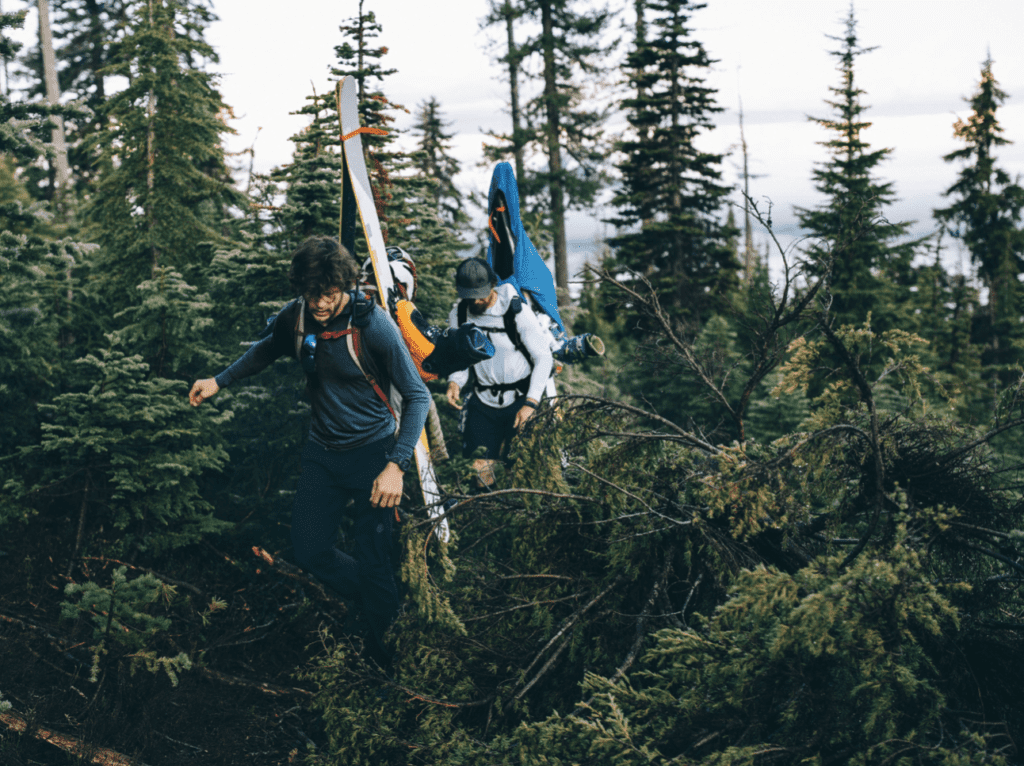 Stio’s short documentary, Rise & Grind: A Human Powered Tour of the PNW Volcanos, chronicles the big endeavor. Andy Cochrane is the “mastermind” of this journey, and he also narrates the video with feeling and a very dry wit as he relates the various misadventures encountered during the trip. Along for the ride is his best friend, Wyatt Roscoe, and another good friend, Charlie Hagan, also joins. And the unsung heroes of this grueling adventure have to be the film crew who remain unseen until the end of the credits, but they doggedly stuck with the biking trio the entire way.

All three guys are certainly capable men, athletic and experienced, but there is a certain touching naivete on display at the onset about which problems or setbacks might trouble them on this journey. They set out gamely enough, even though each bike and trailer combo weighs in at a very non-trivial 180 pounds. As Andy foreshadows at the beginning, the trip actually became about all the various life lessons they learned, which really tied it all together. Each of these lessons is enumerated in the film, with varying degrees of pathos and hilarity. 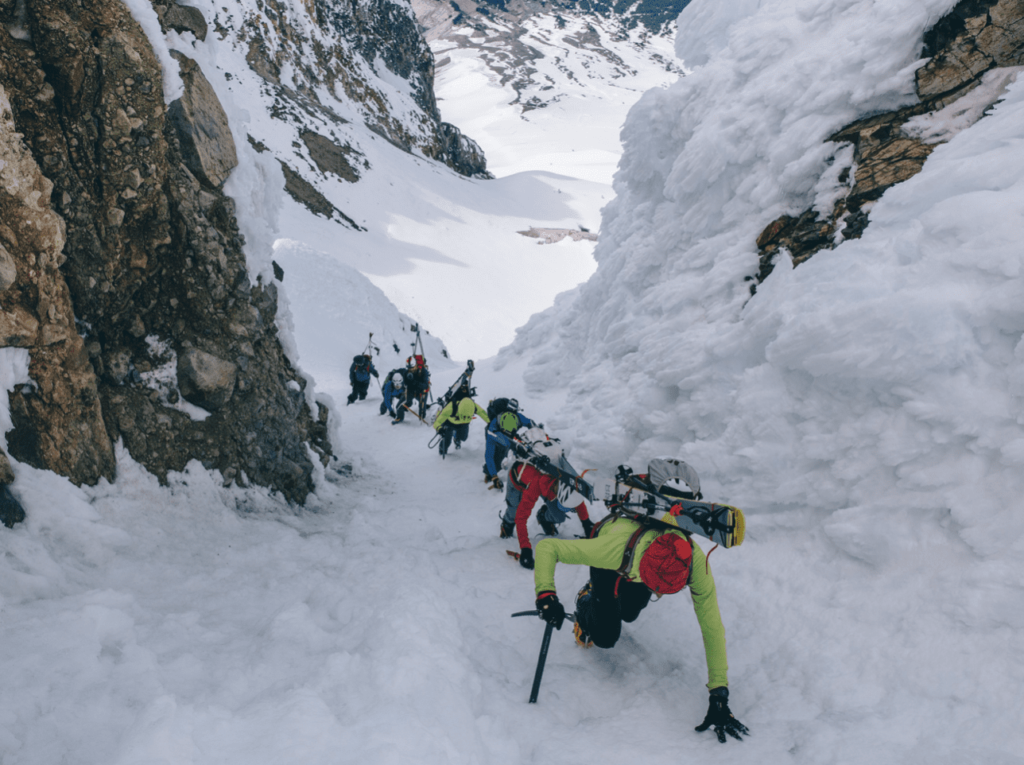 The very first peak was a relative cakewalk, er, cake ride. Fine sunny weather, nice easy roads for bike riding. The next day? Snow. In June. They are 110 miles from Mount Shasta, and the rolling hills prove to be quite a challenge. Nice and easy on the hill coasting down, but on any sort of incline, each of their 180 pounds feels like a ball and chain dragging them back down. The snow and heavy sleet continue, and they can’t make very much headway. And weather like this, almost impossible for biking, isn’t much fun for outdoor camping either. By the end of Day 2, they are already two entire days behind schedule.

But as Andy says, “Like most bad things, storms eventually pass,” and after this one, the gang enjoys beautiful clear conditions with the sky looking freshly scrubbed by the long storm. They make it all the way up to Crater Lake National Park. There is some great video of this beautiful lake, which they can’t help but to oooooh and awwww over. After all, it is the deepest lake in the United States, but at the end of their visit, another ominous storm seems to be brewing.

In the video, Andy emerges from his tent and opens his hand, which holds the biggest piece of hail he has ever seen in his life. What a time to be out camping, on bikes! As it turns out, the trio is in for three solid days of soaking rain, which of course results in drenched clothes, dripping tents, and miserable people. But these guys have a store of resilience, luckily, and after a breakfast of peanut butter (high calories are a really good thing!!), they begin to figure out how they will have to adjust their trip for the lost time. Should they optimize their remaining time to maximize skiing, the fun part, or emphsize travel, the part necessary to complete the adventure? The men are split on the best way to handle this. 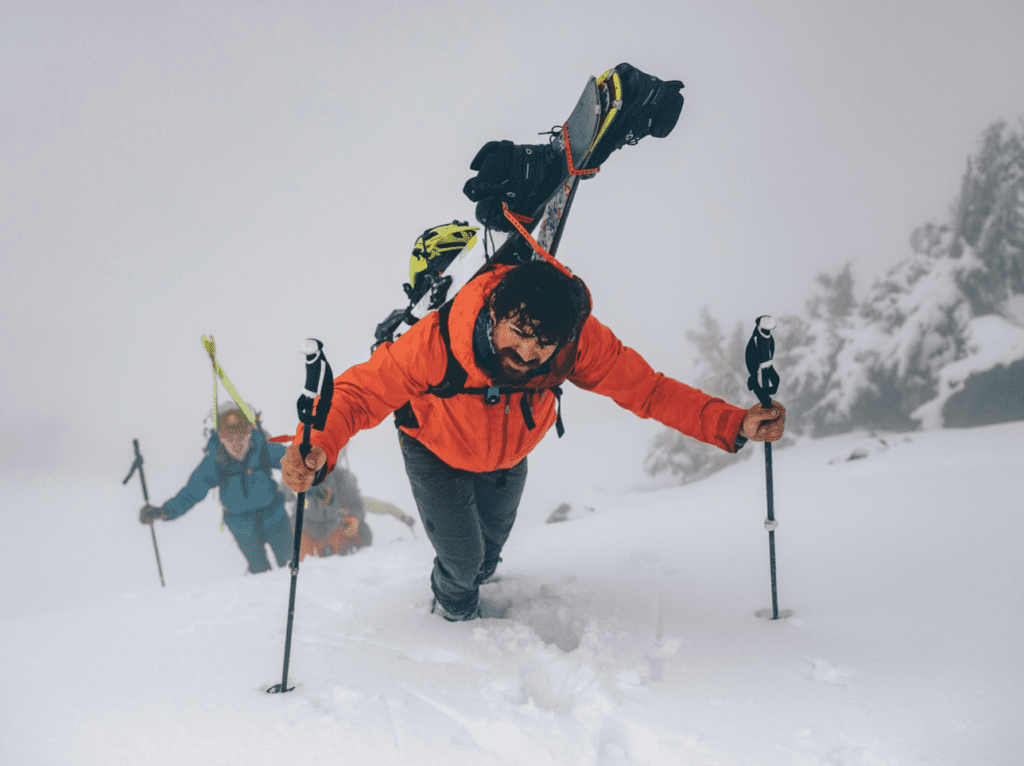 The next peak is South Sister, and after an arduous climb, the steady snowfall suddenly switches to full whiteout mode only 1,000 feet from the summit, and they must retreat. This immediately led to another powwow … this time over whether they should stay and try again tomorrow or admit defeat and leave one peak unsummited. In the end, they decided on the latter, but the decision was not unanimous, and they each second-guessed themselves for the remainder of the trip on what they perhaps should have decided. As Andy put it, “We go into the mountains to learn things about ourselves by pushing limits.” Was this an example of failing that ideal? Surely pragmatism has a role too, in choosing the wiser course even if it means giving something up.

Whether you’re a beginner looking to get your AIARE 1 Avalanche certification, or an intermediate to advanced backcountry user looking for guided trips with famed traverses and epic big-mountain descents, they’ve got you covered.

But regardless of these doubts, the end of the storm brought its usual sunlit glory across the clear skies and white snowy mountains. The views shown in the film are certainly remarkable and welcome to see after the suppressing darkness of the long, heavy storm. As is normal, spirits rise with the sunshine, and the team begins to enjoy themselves again in the fresh air and natural beauty surrounding them. Unfortunately, this enjoyment is not to last.

The gang is now approaching Jefferson, which by reputation at least, is supposed to be the toughest summit of the seven. Naturally, this marks the beginning of two more days of heavy rain, with temperatures stuck down into the low 40s. After a day of this, group morale is down to easily the low of the entire trip. Frigid dripping clothes, numb freezing toes – somebody audibly gripes, “What the hell happened to summer?!?”

The next day is the start of the climb up Jefferson, and it begins in dreary darkness, in the rain and fog, with an occasional change to sleet. Nobody is doing much talking … it is just a slow, steady trudge. It doesn’t look like any fun at all, but one can still admire the grit and determination, and their unusual grim silence is the only indication of how difficult this climb has become. 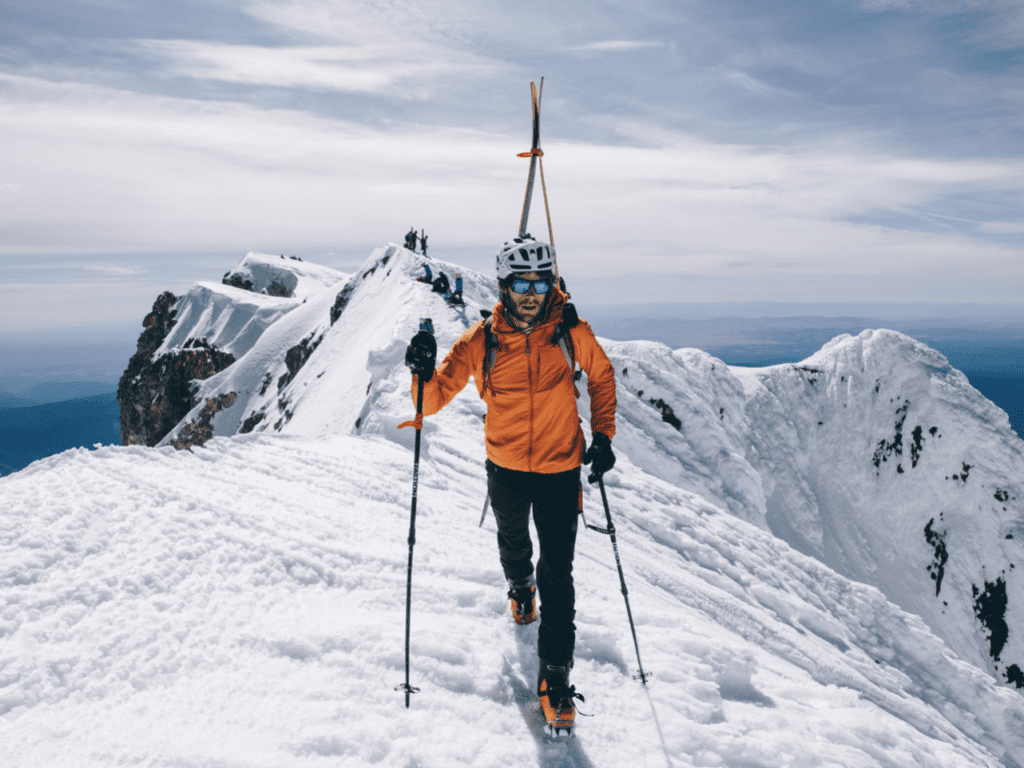 But one of the best things about mountains is they frequently rise above the low cloud cover, and when the group eventually bursts through the last of the dark clouds, it is as though they had been suddenly reborn. With the sun blazing above them, the cold, wet struggles temporarily forgotten, they happily discovered themselves “in pure mountain bliss!” Clear air and blue skies somehow generate energy almost instantly, and Andy, the narrator, takes this moment to deliver Trip Lesson Number Nine: “The lower the low, the higher the high.” He wasn’t the first to discover this, but the way it is documented visually in the film drives this truth home astonishingly well.

Eventually, the three friends approach the final peak of the adventure – Mount Hood. And it is odd to see a “crowded” mountain after weeks and weeks of near-total solitude on the long trail. They reach the end of the journey with mixed portions of relief and sadness that it is over. The guys spend some long moments reviewing in their minds what they had been through together, cementing their bonds. Only at the very end could they finally appreciate what they had all accomplished, and there is a certain revelry as each man looks back and comes to grips with the sheer number of challenges he overcame, both mentally and physically. At this point, Trip Lesson Number Eleven is made: “Take time to soak it all in.” It is an important lesson – let the memories sink in and enjoy the moment as best you can because it will not repeat.

The journey is done, the adventure over, and Andy leaves the viewers with one last poignant message, “Trips come and go, but friendships last forever.”

How To Spend A Winter Adventure Weekend In Ketchum, Idaho

Stio’s Mens Hiking Gear For Life In The Mountains 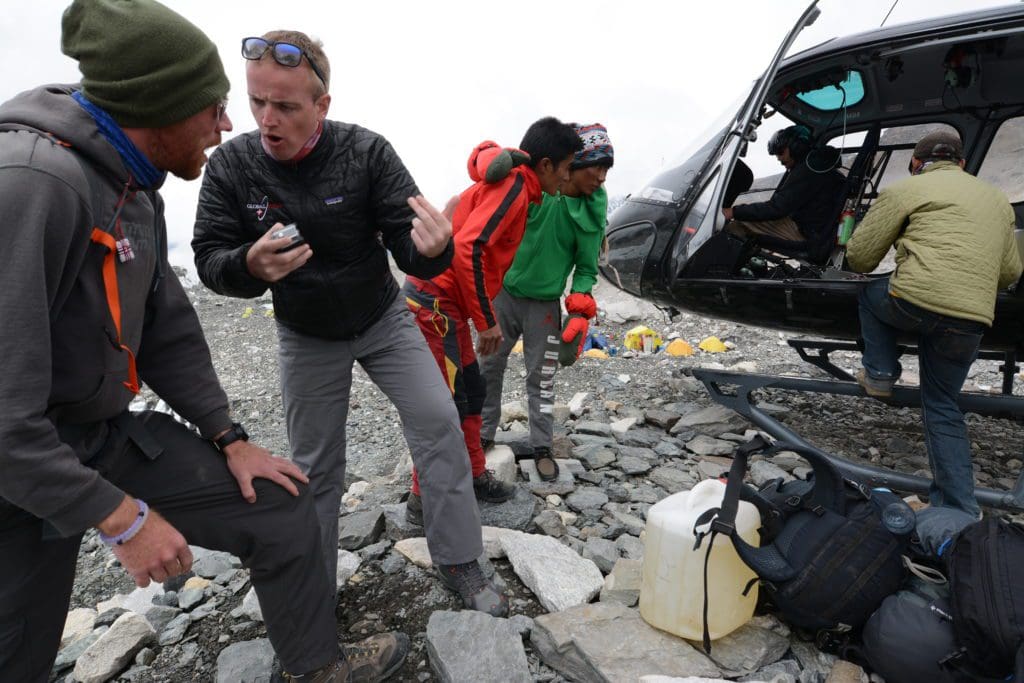 Skyblue Overland Strongly Recommends That You Enroll With Global Rescue Prior To Embarking On Your Next Adventure.

With more people outside now more than ever, Global Rescue expanded services to include field rescue within 100 miles of home. With Local Field Rescue — automatically included in any travel protection services membership — Global Rescue is there whether you’re hiking, kayaking, snowmobiling, fishing or simply enjoying the outdoors and get ill or injured and you’re unable to get to safety on your own. Purchase a Global Rescue membership for your next adventure and travel with peace of mind. Single trip, annual and family options are available.

The Dyrt: The Best Camping Near North Cascades National Park

How To Spend 57 Hours In Bellingham, Washington As A Mountain Biker

Best Guided Adventures In The State Of Washington 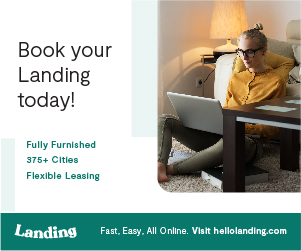 In a season as extreme as winter, where weather forecasts are often wrong and ground conditions change by the hour, how do you even plan a backcountry ski adventure? Colorado based Backcountry Ski Guide, Timo Holmquist, provides a…

In this guide to enjoying the winter on the Front Range, both the urban corridor and the easternmost ranges of mountains in Colorado.