Smokey Bear’s message has remained unchanged since the 1940s. A messages to the American public: That you, I, and everyone share a responsibility to PREVENT FOREST FIRES. 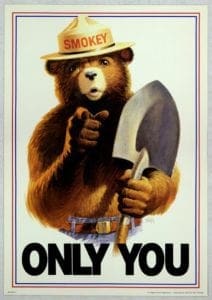 Smokey Bear appears for the first time on a Fire Prevention poster in 1944. Photo courtesy of Filson.

The Cooperative Forest Fire Campaign was established in 1942. As a partnership among the War Advertising Council, the federal Office of War Information and the U.S. Dept. of Agriculture Forest Service, it produced and distributed several posters between 1942 and 1944, intended to inform the public of the danger and preventability of forest fires. One of the drivers of the campaign was patriotism: during World War II, forests were part of the war effort, and destruction of trees curtailed wood supplies, obscured aerial flights of military aircraft, and pulled troops away from training to fight fires. Most outdoor enthusiasts are familiar with the Smokey Bear logo and partnering message: we have a responsibility to our land to prevent wildfires. Filson has long since catered to the rugged outdoorsmen and women who work on and with the land across the United States. 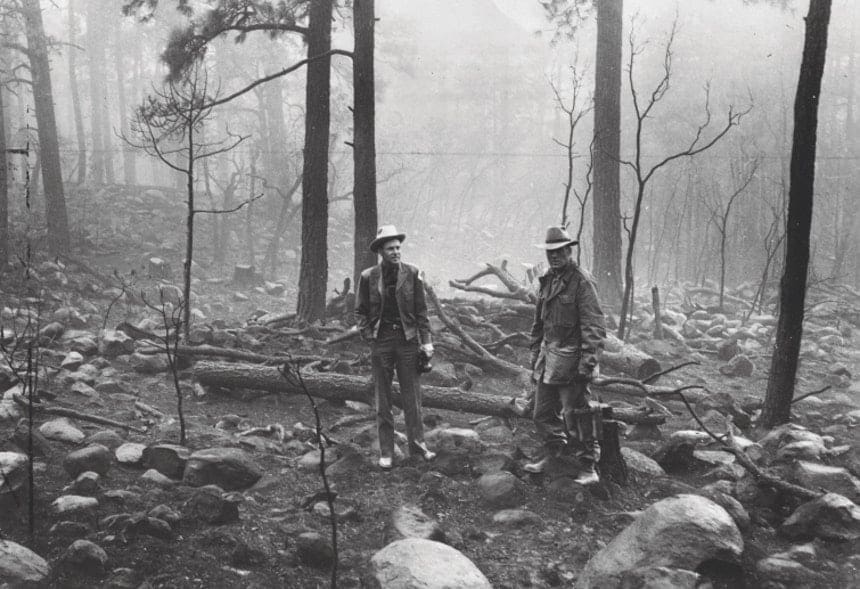 A game warden and a forest ranger inspect the damage done by a man-caused fire which burned more than 17,000 acres of New Mexico’s Lincoln National Forest. A black bear cub, badly burned, was found clinging to a smoldering tree after this fire. The bear cub was cared for and christened Smokey, and he became a national symbol for forest fire prevention. Courtesy of the Palace of the Governors Photo Archives (NMHM/DCA), 029671.

One of the drivers of the campaign was patriotism: during World War II, forests were part of the war effort, and destruction of trees curtailed wood supplies, obscured aerial flights of military aircraft, and pulled troops away from training to fight fires. As part of the forest fire prevention campaign, characters from the Walt Disney movie Bambi were granted limited use in posters during this time. These proved to so popular with the public that the USFS decided it needed a new icon that appealed to children, free of copyright restrictions. Enter “Smokey Bear”, the unmistakable animal character created by the U.S. Forest Service.

Smokey’s message varied, but was always directed at the American public: that you, I and everyone shared a responsibility to prevent wildfires. In 1947, the revised and lasting slogan “Remember—Only You Can Prevent Forest Fires” became the bear’s signature line. The ensuing Wildfire Prevention Campaign lasted 70 years, with hundreds of posters and other advertisements. 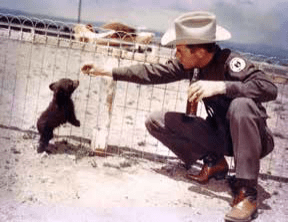 Six years after Smokey’s first appearance in print, the character found a new representative through a live American black bear cub that survived a fire in Lincoln National Forest’s Capitan Mountains of New Mexico. The bear cub was badly burned on its legs, but it survived after climbing a tree to escape the flames. The fire crew rescued the injured bear, and a rancher among them took the animal home. Later, he turned “Smokey” over to a ranger with the New Mexico Department of Fish and Game and the bear was then flown to the National Zoo in Washington, D.C. The U.S. Forest Service adopted him as their living mascot of the same name.

As part of Filson’s commitment to their customers and industry, they’ve partnered with Smokey Bear on a new product line to generate awareness for Smokey Bear’s fire-stopping efforts. Some of these products include variations of the classic Filson Cruisers, the Smokey Bear Limited Edition Ranger Hat, t-shirts, towels, and an enamelware camp set. Here are some of my favorites from the collection: 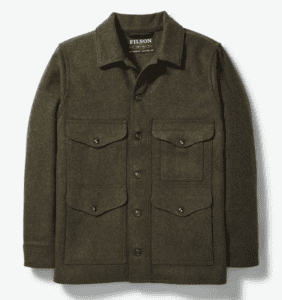 The Cruiser was instrumental in Filson products being adopted by the U.S. Forest service as early as the 1920s, and by the 1940’s, Filson was producing several variations of the Cruiser with custom designs and fabrications for the stewards of our public lands as official uniform attire. 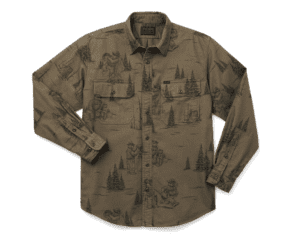 Filson’s dependable Smokey Field Flannel Shirt is suitable for tough outdoor use and comfortable enough for everyday wear. It’s constructed from hardy midweight brushed cotton with officially-licensed graphics of Smokey Bear spreading his message of wildfire prevention in the forest–Filson’s nod of respect to Smokey’s seven decades of service in the U.S. Forest Service. Military-grade melamine-button front and adjustable cuffs. Garment-washed for comfort and shrinkage control. 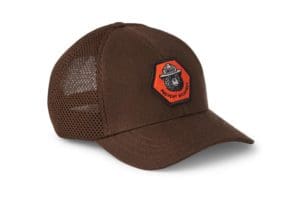 The icon of the Forest Service, honored atop a warm-weather cap. Photo courtesy of Filson. 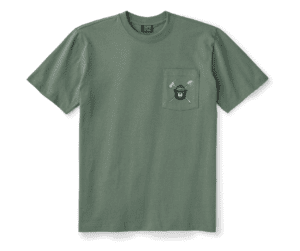 Filson has partnered with Smokey Bear on a new product line to generate awareness for Smokey Bear’s fire-stopping efforts. Photo courtesy of Filson.

All of the products in the Filson Smokey Bear Collection can be found on Filson’s website. 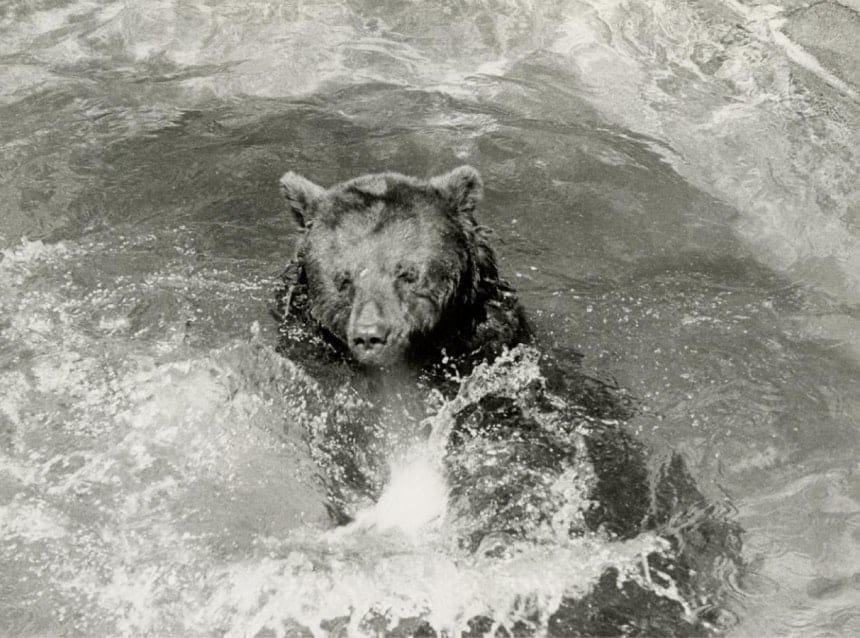 Smokey Bear frolics in a pool at the National Zoological Park. Photo provided by the Smithsonian Institution.

Some of my earliest memories include riding shotgun in my dad’s 1962 Chevy Impala while crisscrossing the U.S.  When I was around 6 years old (circa 1970), my parents took our family on a summer trip to Washington DC.  We visited all the sights, the Capitol and all the monuments.  All I could think of was that I was looking forward to visiting the National Zoo.  I wanted to see an icon – the real Smokey Bear. Needless to say, somewhere in my parents house lies a photo of me standing in front of Smokey with a huge smile.  I was thrilled!

The real “Smokey Bear” remained at the National Zoo until his death on November 9, 1976. That same year saw the formation of a new “hotshots” Type 1 firefighting crew for the U.S. Forest Service, based out of Ruidoso, New Mexico. The group – the Smokey Bear Hotshots – fight forest fires and provide support during other natural disasters across the United States. 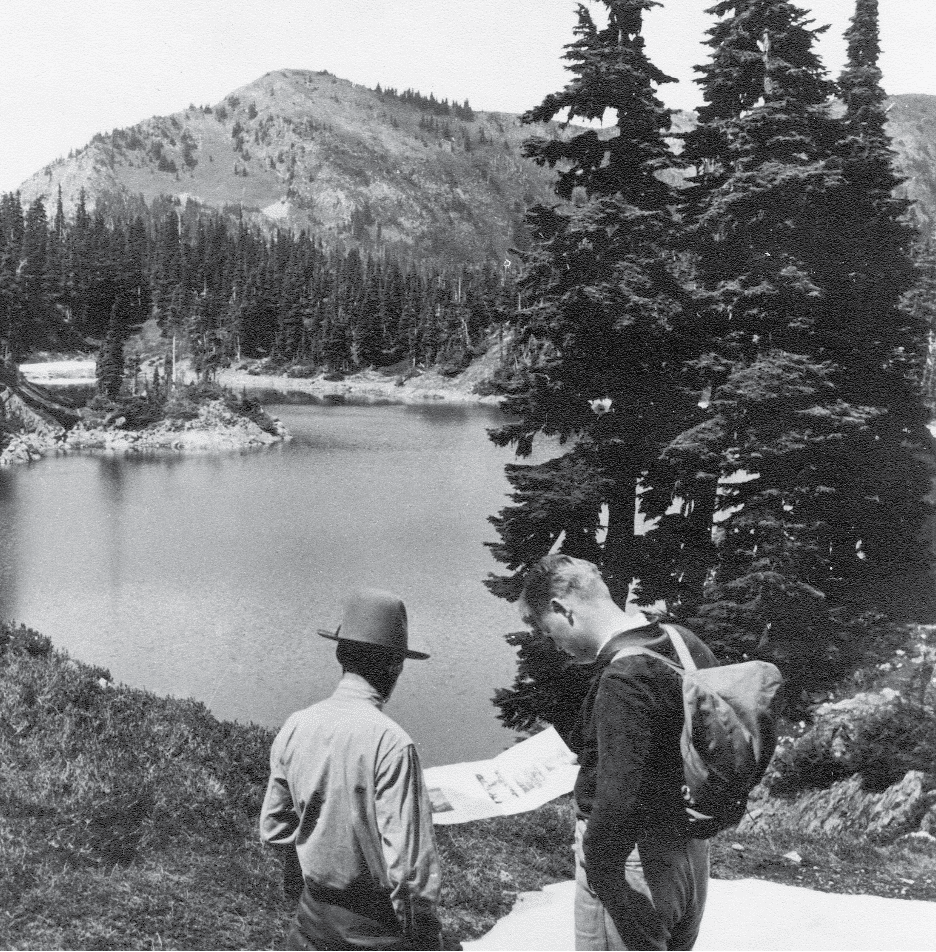 Own a Piece of History With the Filson Smokey Bear Collection. Photo courtesy of Filson.

Although most of us have no intention of setting in motion the forces which could burn hundreds of homes, millions of acres of forest and affect thousands of lives, each year we learn of devastating wildfires caused by careless behavior. Through their partnership with the USFS and Smokey Bear, the folks at Filson (and Skyblue Overland) want to remind everyone this fire season, “Be Responsible. Prevent Wildfires.”

Combining Quality and Passion to Make the Open Sea Possible

Avalanche Rescue – The Search Is On

Perseverance and Grit: The Divers Beneath Puget Sound

REI announces its Cyber Week Sale. Starting 11/27 REI will have great deals from top brands like prAna, Hydro Flask, REI Co-op, Arc’teryx, Big Agnes, Columbia, Mountain Hardwear and more to help you give the gift of more time outside. Better hurry, quantities are limited and some deals end on Cyber Monday!

Discover the relaxing vibes and thrilling highs of Virginia’s Blue Ridge Mountains—just a short drive from Washington, DC. Book by Dec 6, 2021 to save 20%.

Osprey’s Archeon backpacks are not only designed impeccably for their intended use backpacking or hiking, but these packs also hold a lot of storage, something that is so essential on a road trip when space might not be…