In today’s America, you can’t escape from hearing about “polarization.” Everyone is supposed to be polarized, meaning no two people can agree or get along. There’s the right versus the left, the old versus the young, people who are new to America versus people who have been here for generations. There are really any number of potential fault-lines. And of course, all these broad groups are divided up even further, so there can be more groups to argue with. There are the “far-right” who can’t agree with the “moderate right.” There are religious differences to keep us apart. All of society has become sub-divided and labeled, with finer and finer granularity, so that they can be easily set up against each other in more and more detail.

But does it have to be this way? Can an old-timey sort of community even exist any longer, given how people today are more prone to celebrate their differences rather than their shared interests? Filson Films has put together a remarkable short film, Red Gold: The Livelihood of Bristol Bay, which documents such a community as it exists today. People working together rather than against, and the common good is understood to be a natural part of the community’s fabric. When some succeed, they all succeed.

What gets lost in all the discussion of polarization is the fact that America, along with most other places, used to be defined and connected by its communities. There used to be a feeling that everyone had a duty – even an obligation – with all their neighbors to put aside their differences, if any, and instead concentrate on their strengths, their commonality. Okay, so you are a new-age libertarian, and I’m an old stick-in-the-mud conservative. We will perhaps never agree politically, but we can still live next to each other and find ways to co-exist and both work together toward a better future. Chances are we both want a nice, safe, peaceful neighborhood – we are totally aligned on this point. We both want each other to be able to vote and have their say in how things are decided – again, we are in agreement. We both hate trash and the destruction of the environment – here’s a third goal we share! Your country music you can keep, and I will try to keep the volume down on my old rock & roll: we agree to acknowledge and live with our differences. They do not define us, nor do they need to drive us apart. We understand our differences, and believe it or not, they are a strength rather than a weakness! 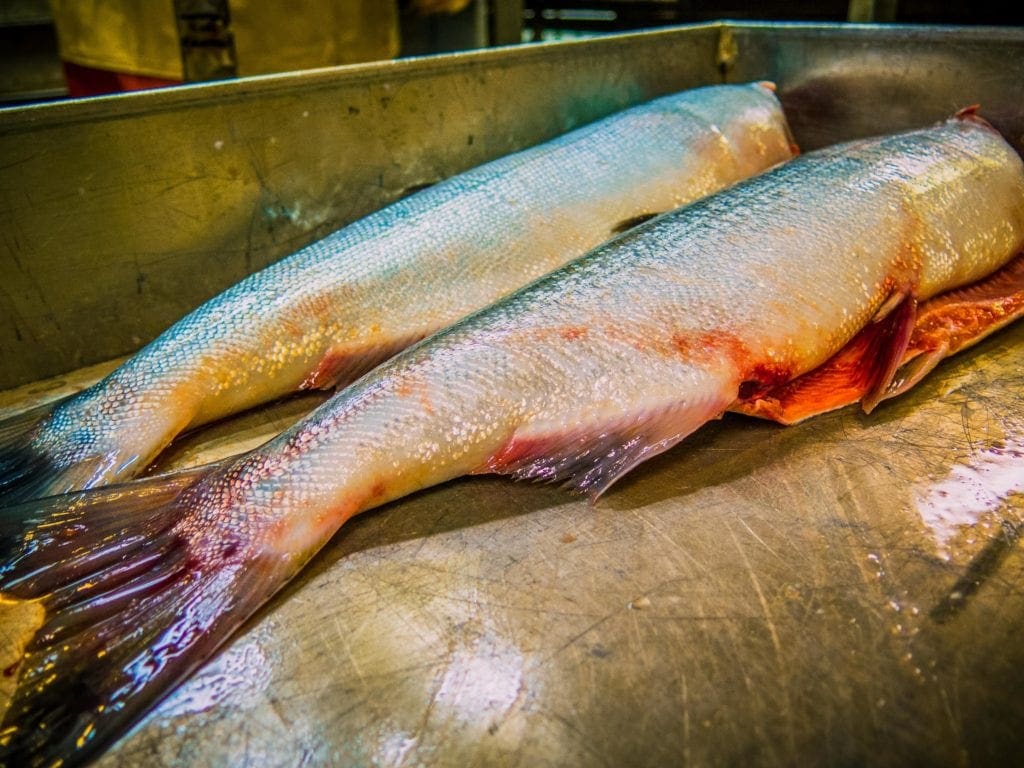 Clean and fresh Sockeye Salmon are ready to be flash frozen for the market. It turns out that Bristol Bay is the biggest red salmon fishery on the planet.

Dillingham, Alaska is a tight-knit, old-style community. It is a real community, composed of literally all sorts of individuals, living and working together toward a common purpose. In this case, the simple objective is sockeye salmon, native to the North Pacific and the abundant rivers that flow into it. It turns out that this is the biggest red salmon fishery on the planet. It is also the fastest, with fishing here being likened to running a race.

When a natural resource like salmon is available, abundant, and free, one can expect a lot of eager takers. Many people from Washington State migrate north seasonally each year. But Dillingham isn’t exactly the easiest spot to get to. On its own bay, literally just off the Bering Sea, it has never been connected to the national road system. The only way to get there is either by airplane or boat.

One might not call this an “exotic locale,” but it certainly does not lack for poignant visuals, which the video shares in detail. The iron-gray seas rolling under a forbidding low sky, the churning masses of cold silvery salmon, and the dread of bitter cold horizons fast approaching fill the video, as do the gripping testimonials from the locals. In keeping with the idea of a good old-fashioned community, the film relies on a dramatic classical score to reinforce this theme.

In the film, we meet a weather-beaten fisherman whose great-great-grandfather was one of the very first outsiders to arrive in Bristol Bay. We meet seasonal fishermen who sail up from Washington and farther places, who frequently spend the first month in dry-dock, fixing up their vessels, most of which need repair by the time they make it up so far north. These visitors try to live on their boats, but it is difficult to be both repairing a shipping boat and living on it simultaneously, so many of them have to make do with living in old shipping containers. They have turned these into rudimentary living quarters and workshops, as they get their boats shipshape ahead of the huge salmon runs. Living and working in his raw, rusted metal hut, a fisherman likens his experience to a “post-apocalyptic living” style. You can see what he means, but he also says it with a smile – you get the idea he’s nevertheless happy to be there and will be returning for many years to come.

Of course, in addition to the seasonal visitors, there have always been the locals, the real natives. Of the many different sub-communities within the larger community are indigenous people who still live there and for thousands of years (at least) have lived off the land, essentially performing true subsistence living. With Bristol Bay being so remote and isolated, it seems only natural to find that some of the people who have always been there are still there – natural inhabitants continuing to live from the local resources.

And together, the older settlers, the new yearly arrivals, the bedrock native people, they have created a thriving community – all working together. The difficulties of the land, the toughness of the work, all of this serves to bind them together. It is a mixture of the love for this beautiful, rugged area, combined with the shared experiences of having to somehow wrest a livelihood from these cold, dangerous waters, that make them almost an extended family. Everyone’s been through these challenges.

By the end of the short video, the film’s title, Red Gold: The Livelihood of Bristol Bay, seems absolutely perfect. The native salmon is their precious gold, and it has allowed the diverse community to survive and prosper. The oldest natives already have their roots, of course, but the relative newcomers have also put down strong roots, several generations deep.

The symbiotic relationship with the land and the sea also helps to connect everyone further, through the pride of shared ownership. Of Bristol Bay itself, we learn that “this place is unique because it’s so untouched. Hundreds and hundreds of miles of lakes and rivers and watershed. When you buy our sockeye salmon, if you know that it comes from here, you know that you’re supporting people who have whole communities built around this resource. And we’re not going to mess it up!”

“No place in the world produces salmon like Bristol Bay. Nowhere. And that’s how it was 150 years ago. That’s how it is today.”