Olympic National Park is a patchwork of different ecosystems: its glacial peaks, old growth forests, and Olympic Mountains were formed 34 million years ago. The varied ecosystems include subalpine, coast, temperate forests and lowland forests. With such variability, Olympic National Park seems like many parks in one. The mountain ranges are like a crown, famous for its climbing and hiking trails which cut through the thick rainforests. 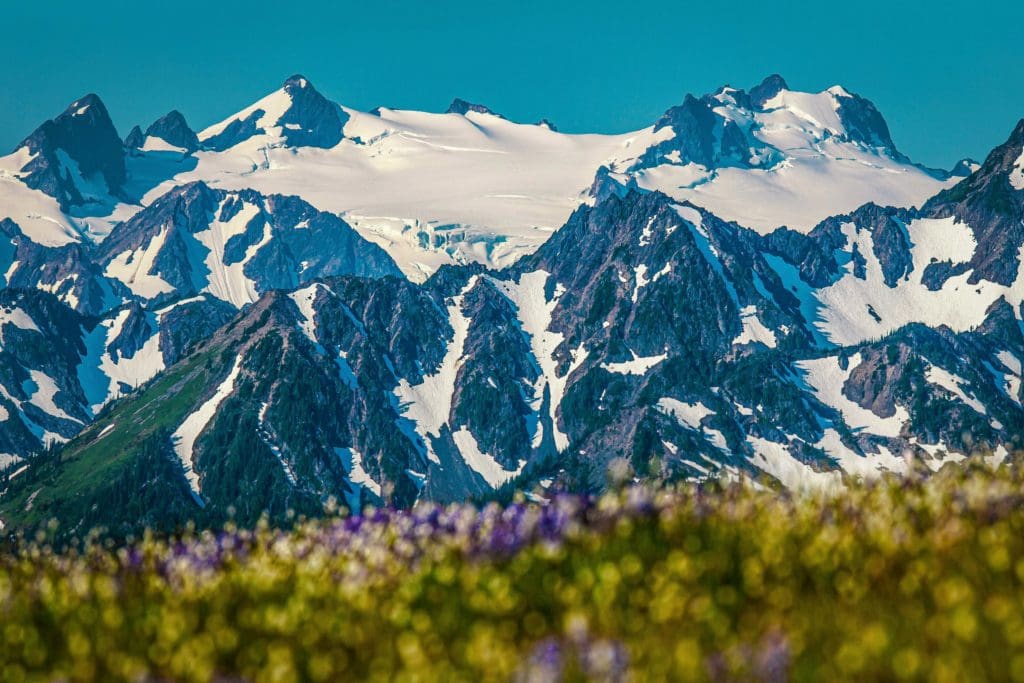 This World Heritage Site is isolated from other mountain ranges and surrounded by the waters of the Pacific Ocean and Puget Sound. Adventurers can see wildlife including bald eagles, marmots, elk, mountain goats, black bears, and even whales. Hurricane Ridge, rising over a mile above sea level, houses a visitor center and hiking trails featuring panoramic views of the rugged, snow-caped peaks of nearby Mount Olympus, the Blue Glacier and the pastoral green forest lands. 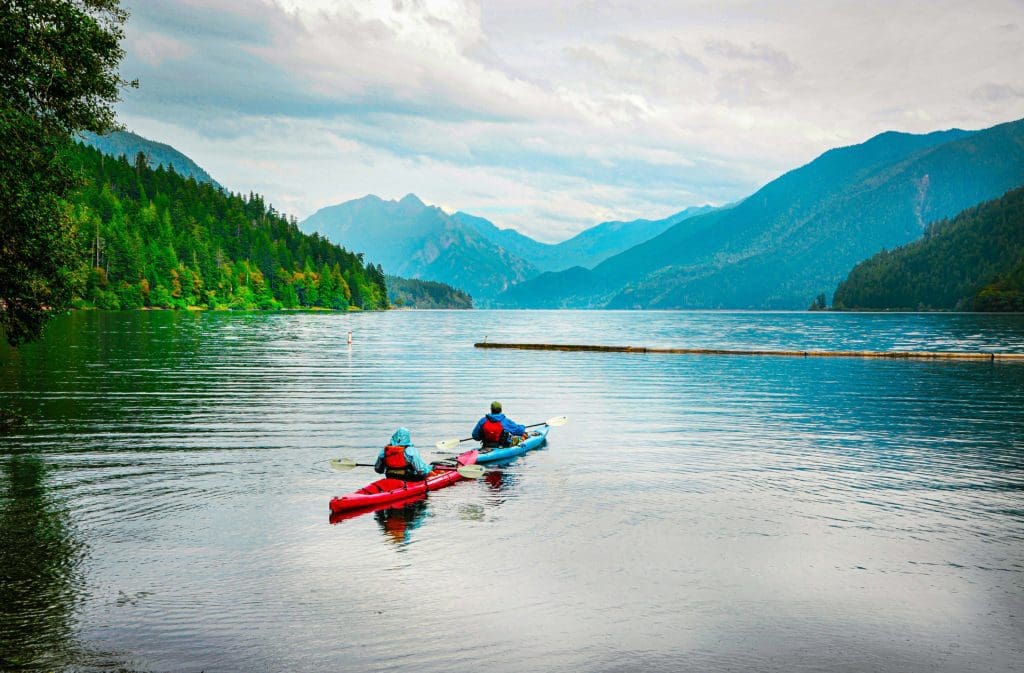 Olympic National Park has lots to see, so it takes several days to see everything. An array of water-based activities can be found at the park, including fishing, kayaking and boating. Ocean lovers can enjoy the crashing waves or peaceful walks along the beach at low tide. In winter, snow sports include snowshoeing, tubing, cross-country skiing and downhill skiing in the high country.

Visitors to the park have several options for lodging. Overnight backpackers, campers, RVers, and people staying in cottages or lodges will find comfortable accommodations. 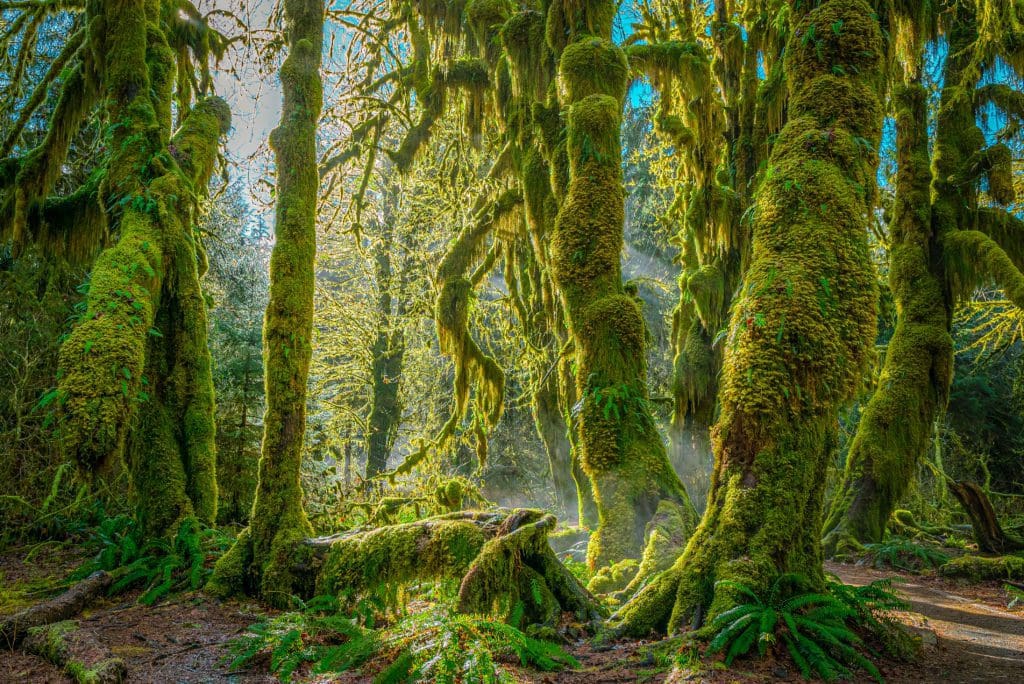 The nearby city of Seattle is well known for its heavy rainfall. Olympic weather is also famously wet, so it’s not surprising that the USA’s only rain forest is in the Pacific Northwest. Olympic National Park is home to temperate rainforests, where mosses, ferns, red alders, Sitka spruce and Douglas fir grow. These rainforests are also home to epiphytes like cat-tail moss and licorice ferns. The wet and warm conditions result in dense and lush woodlands with numerous wonderful hikes where tall trees and wildlife are abundant. 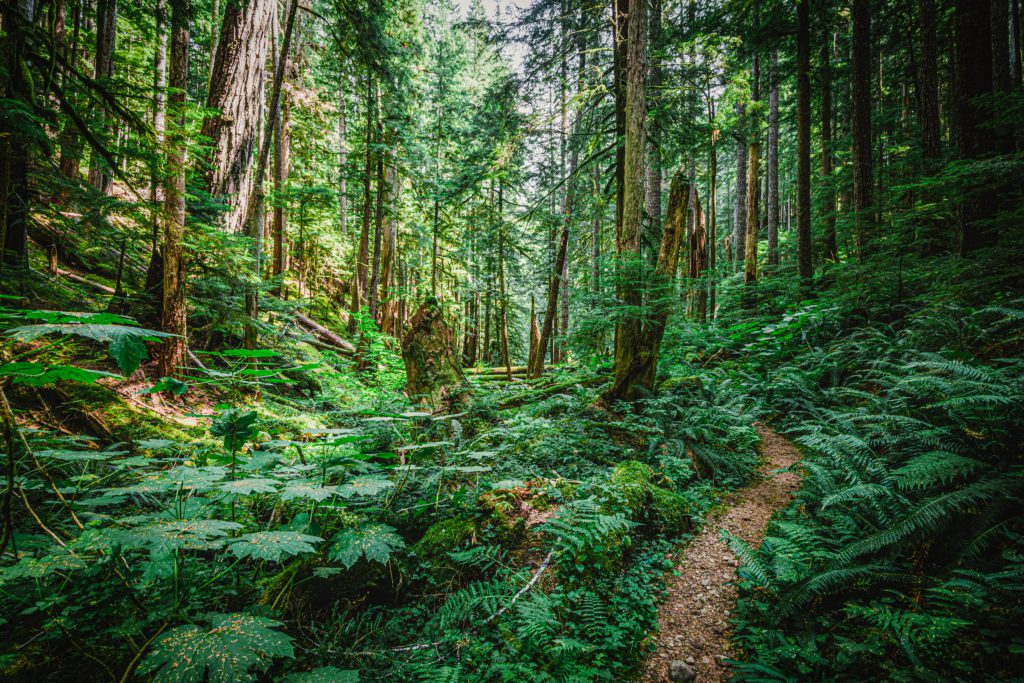 A trail leads hikers through a dense and lush rainforest in Olympic National Park where tall trees and wildlife are abundant.

Huge Pacific Northwest temperate rainforests once stretched from Oregon’s southern coast to southeastern Alaska. Because of development, very few exist outside of Olympic National Park today. Olympic is home to four rain forests where you can explore the Hoh, Quinault, Queets and Bogchiel rain forests.

Filson’s Swiftwater Rain Jacket is engineered for active use that requires lightweight, waterproof protection that can be pulled out of your pack or vest in an instant. 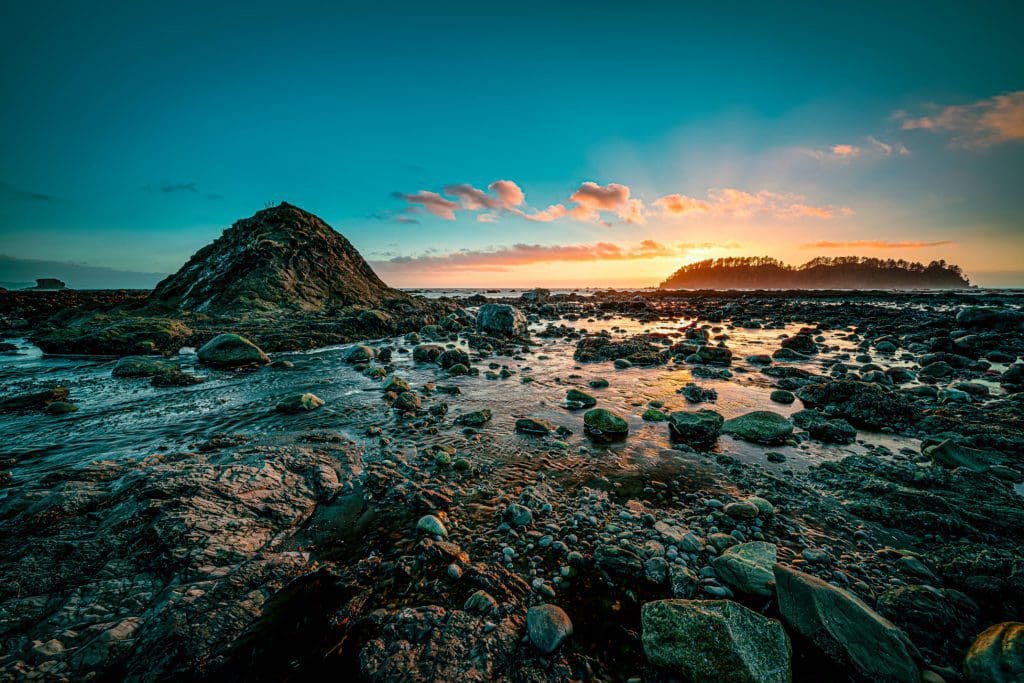 Olympic National Park’s beaches are a marine wonderland, especially after the waves leave behind nutrient-rich pools after high tide. The park has 70 miles (113km) of wild, rugged coastline, which is rare in the United States, where much of the coastline is prime real estate. The coastal area features rocky headlands and beaches, tidepools that nurture a living rainbow of colors and textures, off shore sea stacks topped by nesting seabirds, and wind-sheared trees. In 1988, Congress created the Olympic Coast National Marine Sanctuary, which designated much of the coastline to the United States’ national system of protected wilderness.

The harbor seals that live near the coast all year long are commonly seen resting on rock outcrops. They hunt in the intertidal zones when they are not taking a rest. Porpoises and sea lions frolic in the surf, while sea otters play in the water farther out. The tide pools can yield bright sea stars, anemones, and sea urchins. Gray whales blow misty jets of vapor when they surface to breathe. Their migration is supported by the park’s rivers, which are home to the spawning runs of five salmon species.

The coastal portion of the park has a rugged, sandy beach along with a strip of adjacent forest. It is 60 miles (97 km) long but just a few miles wide. At its mouth live the Hoh Tribe, near the town of La Push, and at the mouth of the Quileute River live the Quileute people. The beach is a 20-mile (32-kilometer) wilderness of sand, boulders, and heavy wild shrubbery. Some people hike the entire coastal strip but others venture beyond on day hiking trips into the Olympic Mountains. The Olympic natives called this landscape ‘N’Quatqua.’

Looking For An Amazing Adventure? Book A Guided Hiking or Backpacking Tour in Olympic National Park with REI Adventures. 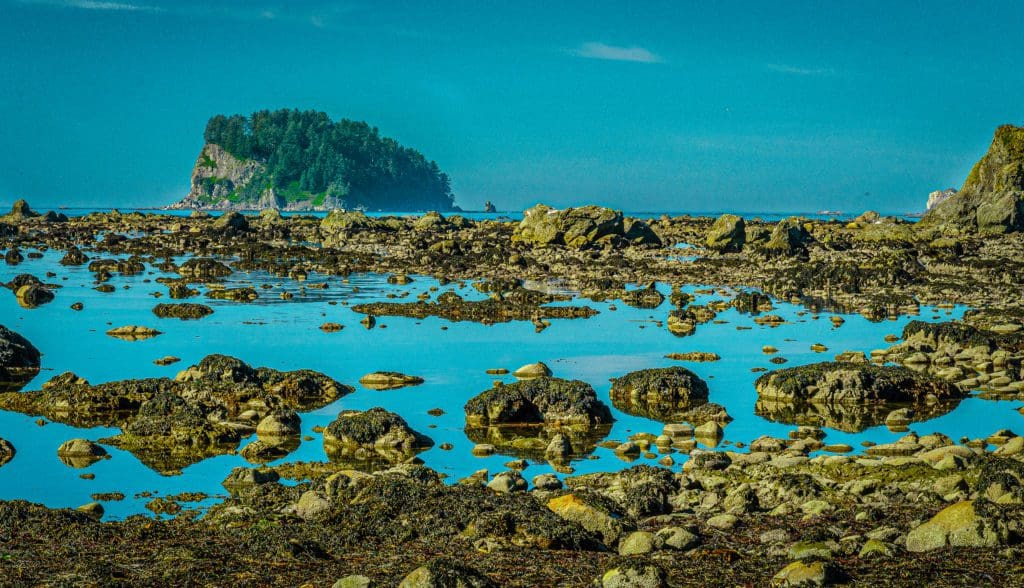 The Ozette Loop Trail is most popular part of the coastal strip in Olympic National Park.

The most popular part of the coastal strip is the 9-mile Ozette Loop. The Park Service runs a reservation and registration program to control the usage levels in this area. From the Ozette Lake Trailhead at the end of the road, the first 3 miles of the trail is a boardwalk-enhanced path through a coastal cedar swamp.  It’s a total of 3 miles from here to there. The Makah have traditionally lived here. 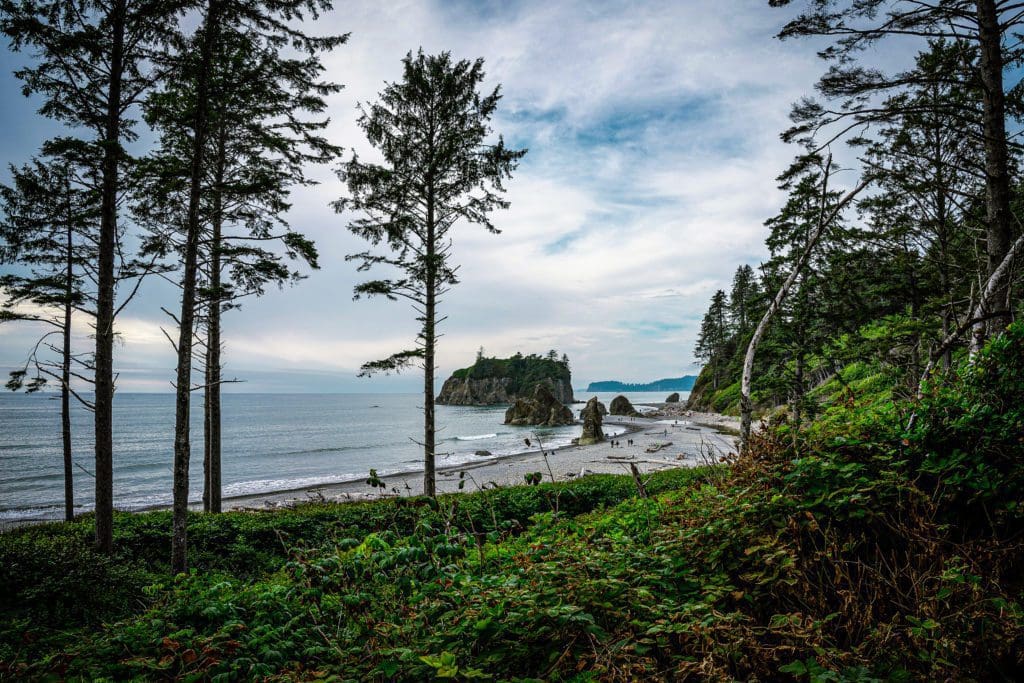 You can get a good look by checking out Kalaloch Beach 4 and Mora’s Hole in the Wall. Rangers will be happy to explain the tide pool environment to you. Additional tide pools can be found at Second Beach, Third Beach, and Ruby Beach. 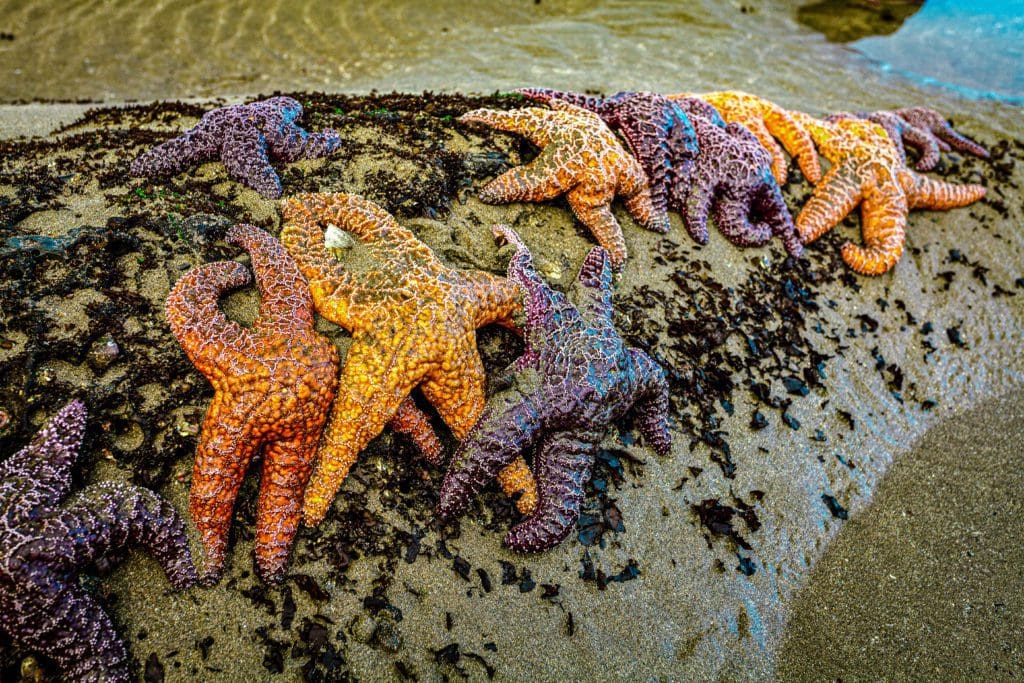 Ever wonder what a tide pool is? A tide pool is an area left by the sea when the tide goes out. Tide pools provide a home for hardy organisms, from starfish to anemones. They provide a habitat for changing environments and hazards, with wave activity, strong currents, and exposure to harsh midday sun.

There is something invigorating about the sun, salty air, and refreshingly cool waters. When many people go to the beach, they let their kids explore freely, which they love. This coastal location allows visitors to see rare ocean phenomena more easily. It can be noted that one can look but don’t touch these delicate creatures. 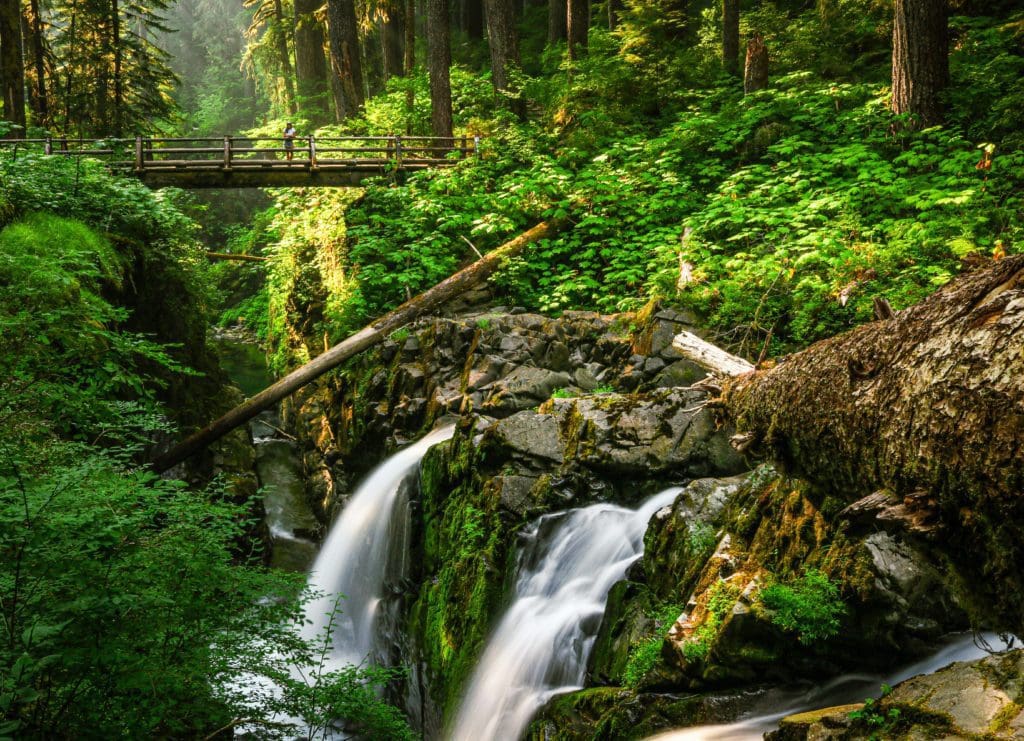 Support Skyblue Overland by booking your hotel or cabin through one of our links.

Before the influx of European settlers, Olympic’s human population consisted of Native Americans. Recent reviews of the record and systematic archaeological surveys are pointing to much more extensive tribal use of the mountains than seemed to be the case.

There is archaeological evidence that the people who inhabit the area now call Olympic National Park had been there 12,000 years ago. For example, Native American hunters took down the mastodons in the area around present-day Sequim. Whaling villages along the coast of Ozette were another example. And some Native American families traveled through the Olympic Mountains and into neighboring villages to visit each other. All of these groups had inhabited and used the land before European Americans arrived to settle and develop it.

Olympic National Park is adjacent to the reservations of several Native American tribes, including the Skokomish, Mahah, Hoh, Quinault, Quileute, Jamestown S’Klallam, Port Gamble S’Klallam, and Lower Elwaha Klallam. Each of these tribes have strong cultural ties to the land. Traditions of the coastal tribes include the potlatch, an elaborate feast and social gathering. 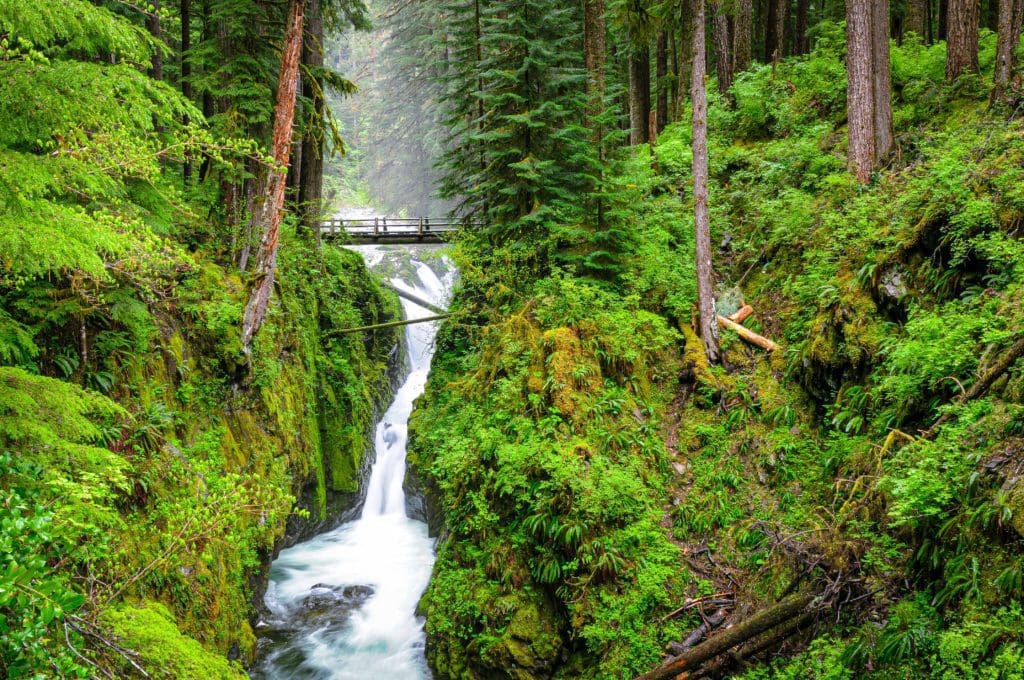 The Spanish explored this area in the 1770s. They established a beachhead at Neah Bay in 1792, but it was abandoned months later. Many pioneers arrived in the 1800s. The first permanent settlement was founded in Port Townsend in 1851.

From the late nineteenth century to the early twentieth century, logging took off in the Pacific Northwest. Public dissent began to take hold in the 1920s when people got their first glimpses of clear-cut hillsides. The use of cars and tourism further fueled people’s interest in nature and their surroundings.

When logging began in the Pacific Northwest, the increasing demand for timber began in the late 19th century. As people became more interested in leisure activities, they started to take road trips and go to places like the Olympic Peninsula; however, when they took their first drive through the region and saw clear-cut hillsides, they began to fear that this type of logging could be harming the natural environment. These concerns began to emerge in public forums in the 1920s.

Public support for preserving some of the area began to grow, and President Franklin D. Roosevelt signed a bill that created a national park in 1938. The Civilian Conservation Corps created a headquarters in 1939 with funding from the Public Works Administration. It is now listed on the National Register of Historic Places. The park’s territory was expanded in 1953 by 47,753 acres (19,325 ha), including parts of the Queets and Hoh valleys, along with the Pacific coast between the Queets and Hoh rivers.

Even though Olympic National Park was created to protect the land, illegal logging continued after it was established. Today, political battles are still being fought over some of the land in the park, which continues to be logged.

Within the center of Olympic National Park rise the Olympic Mountains whose sides and ridgelines are topped with massive, ancient glaciers. The mountains themselves were uplifted by tectonic forces related to the subduction zone of the Juan De Fuca Plate, and they were shaped by violent volcanic eruptions in their early history. High peaks and ridges rise above the western ridge. The tallest summit in this area is Mount Deception, standing at 7,788 feet (2,374 m), while the highest point in the park is the peak of Mount Olympus in the western range. Mount Olympus receives a lot of snow and has more glaciers than any non-volcano peak in the contiguous United States outside of the North Cascades. Runoff from these glaciers provide an essential lifeline for aquatic life, especially during the less rainy summertime. Old-growth forests rely on meltwater for cooling too.

Evo offers courses for riders of all abilities and experience levels, with great options for newbies and veterans alike. Check out the courses below and join evo on the skin track this winter.

Combining Quality and Passion to Make the Open…

Over the past four decades, Port Townsend, WA has become an important hub for the building and maintenance of wooden boats on the West Coast. It is there that the history and skills of wooden boatbuilding are still…

Considered a fly-fishing paradise, the Alagnak River is a 64-mile Class I and II river that originates in the Aleutian Range in the Katmai National Park. It snakes westward toward Bristol Bay and the Bering Sea, crossing the…